Rick Jenkins currently serves as Police Chief in North Palm Beach, and is a 30 year leader in South Florida policing. Chief Jenkins holds a masters of Criminal Justice from Boston University and is a graduate of the FBI National Academy and the Senior Management Institute for Police Executive Research Forum Command Colleges 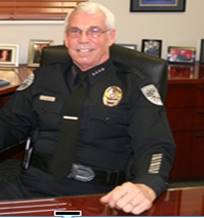 Captain Mel Lange began his law enforcement career in the U.S. Air Force as an Air Policeman and retired after twenty years of service as a Master Sergeant. He then began working for the Broward County Sheriff’s Office, Fort Lauderdale, Florida for 19 years where he started as a Patrol Deputy and held various positions within the Sheriff’s Office and retiring in the rank of Captain.

He is responsible for the Professional Standards Division that includes: Accreditation, Training, and Internal Affairs. Captain Lange has an MBA in Justice Administration from the Golden Gate University, San Francisco, CA.

He is a graduate of the University of Louisville Command Officers Development Course and is a Life Member of the IACP (International Association of Chiefs of Police).

Captain William Minton began his career in Law Enforcement in 1988 as a Deputy Sheriff in Alachua County. Since then, he has served with the Punta Gorda Police Department, the St. Lucie County Sheriff's Office, and most recently, as Chief of the Reserves for the Florida Department of Environmental Protection's Park Police.

Captain Minton joined the North Palm Police Department in 2012 and coordinates the Reserve Officer Program, of which he is also a member. After serving for more than 11 years as an Assistant State Attorney in Palm Beach County, Captain Minton works full-time as the Florida Highway Patrol’s Senior Assistant General Counsel. With this experience, he often assists North Palm Beach Reserve Police Officers with training and updates on new or changing laws.

Captain Minton earned a Bachelor's Degree in Journalism from the University of Florida, and a Juris Doctor Degree from Stetson University's College of Law. He is a member of the Florida Bar, as well as a member of the bars for the District of Columbia and the Supreme Court of the United States. His family settled in South Florida in the 1800’s, and he is a fifth-generation Floridian.